With every new television season, there are always sad farewells to favorite shows that have ended (Parks and Recreation, CSI: Crime Scene Investigation) and watching with anticipation the new crop of shows to see what will take the place of shows gone by. The new 2015-2016 season had many promising entries, but one is about to go by the wayside quickly because of one particularly troublesome theme.

The basic premise of “Quantico” seems interesting enough: a terrorist strike occurs in New York City and the prime suspect is someone from a class of FBI agent trainees that convened nine months earlier, specifically, Alex Parrish. The show switches between present time (after the terrorist strike) and the past (while the class takes place at Quantico). 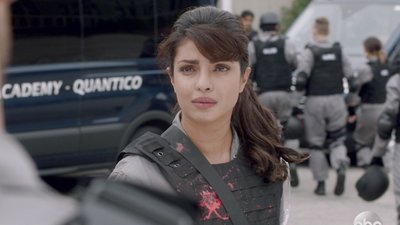 I was going to give this show a shot, willing to overlook gratuitous sex scenes and sexual innuendo because I love a good mystery. However, there were two instances of the writers’ liberal leanings that I just can’t abide with and thus will remove the show from my DVR.

The first instance occurred in the show’s first episode, “Run.” One of the trainees, Eric Packer, is Mormon and the quick shots of his background show him attending his home temple and being an all-around nice guy. Nice, that is, until the trainees’ first assignment: to dig deeper into a fellow trainee’s background to find some information which was purposely omitted from their personnel files by the instructor. When the assignment is over and Eric’s secret is about to be revealed, he stresses so much about it that he pulls a gun and commits suicide in front of the entire class. The secret that Eric couldn’t bear to have the whole world know? He was on a mission trip in Africa and got a 14 year old girl pregnant; whom he subsequently took for a clandestine abortion from which the young girl died.

Liberal propaganda #1: pro-lifers are hypocrites who will resort to abortion when faced with a bad situation.

Liberal propaganda #2: women die from unsafe abortions around the world and that’s why we need to legalize abortion in developing countries.

I was ready to ignore that story as it wasn’t central to the plot and I figured it wouldn’t be mentioned again. But the very next week, in the show’s second episode, “America,” it happened again. The second instance occurred during a training exercise where the trainees had to look over three staged rooms that were based on supposedly real cases where terrorist acts were stopped by the FBI: an attempt on a senator’s life, bombing a public auditorium, and a suburban mom’s plan to burn down a Planned Parenthood where her daughter got an abortion.

As with most propaganda, there is always a little bit of truth hidden within. Yes, some pro-lifers have had abortions in their past, but overwhelming message of the pro-life movement is that there is forgiveness for those who have made this choice in their past. As for the third item, the pro-life movement abhors violence as a solution to the violence of abortion and thoroughly condemns those who take to bombings or shootings. For the writers to say that these were religious zealots, as opposed to plain old fanatics who have gone off the deep end, implies that those who oppose abortion on religious grounds are not the norm.

Episode 3, “Cover,” is on my DVR, but I think it’s time to distance myself from this show. Excuse me, but your liberal propaganda is showing, and that’s enough for me to stop watching.

5 thoughts on “Excuse Me, Your Liberal Propaganda is Showing”