The Canadian Supreme Court ruled that the law which bans physician assisted suicide is unconstitutional because it violates a terminally ill person’s right to life. The Court ruled that the ban causes some people to end their lives prematurely for fear that they many not be able to do so later on without the assistance of a physician (which used to be illegal).

So, in effect, the Canadian Supreme Court says that it respects life by allowing someone to end it and that a law which protects life (so that terminally ill patients aren’t coerced by family or doctors or insurance companies) is a violation of the right to life.

Does that make any sense to you? Read the full article on the LifeNews website by clicking here.

Today, the Supreme Court of the United States (SCOTUS), handed out opinions on two very important cases: one regarding the Defense of Marriage Act (DOMA) and the other regarding California’s Proposition 8 (Prop 8). Once again, SCOTUS got it wrong; however, that doesn’t mean same-sex marriage is now legal in all the nation.

The judge in the District Court opined that Prop 8 was unconstitutional and ordered the elected officials not to enforce Prop 8. The elected officials did not appeal the ruling and order, but the District Court allowed the supporters of Prop 8 to file an appeal. The Ninth Circuit Court and the California Supreme Court agreed that the supporters were allowed to file the appeal.

What SCOTUS said was that the supporters of Prop 8 had no legal standing to file the appeal in a federal court. In fact, SCOTUS vacated the Ninth Circuit Court’s answer to this question the case was remanded to the District Court. SCOTUS got it wrong on Prop 8 because the people of California should have the right to defend a properly voted upon state constitution amendment if the elected officials will not uphold their constituency’s rights.

For more information on DOMA, see the Alliance Defending Freedom’s webpage on DOMA.

For more information on Prop 8, see the Alliance Defending Freedom’s webpage on Prop 8. 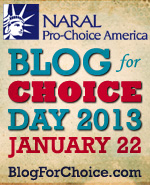 legalized abortion in every state during all nine months of pregnancy. And today, January 23, 2013, marks the 40th anniversary of a lesser known, but just as important, decision from SCOTUS regarding abortion: Doe v. Bolton (Doe).

Roe was important because in one stoke of the pen, SCOTUS overthrew the states’ right of making their own laws and struck down every law in this land against abortion. To be clear, 17 states had already legalized abortion of some sort prior to that decision, but most of them had restrictions on which trimester those abortions could take place. What Roe did was make it legal to abort a baby any time during the whole nine months of pregnancy if the mother’s health was at risk. But Roe didn’t define what it meant for a mother’s health to be at risk.

Doe took care of that. The day after Roe was handed down, SCOTUS handed down the Doe v. Bolton decision which basically defined the health of the mother as any reason whatsoever. We’re not just talking about mortal danger to the mother, which is what most people that I speak with think it means, Doe defined it to mean any type of physical health issue. So, for example, if a woman doesn’t want to deal with morning sickness, that’s a proper reason (according to Doe) to get an abortion. Additionally, Doe broadened the definition of “health of the mother” to include other types of “health” both of legitimate concern (e.g. mental) and the outrageous (e.g. economic). Whatever the reason, or type of “health” issue, cited there really is no justification for ending the life of an innocent human being. 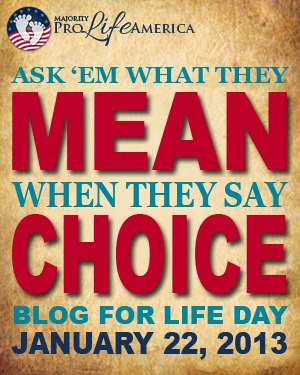 But the reality is that the folks who are pushing the “choice” agenda–and I don’t mean your friends, relatives, or co-workers who, when asked “Are you pro-life or pro-choice” say they are pro-choice but don’t really know what that means–the ones who take in billions of dollars under the banner of “choice” and pay out millions through their political action committees, know what choice they’re talking about: abortion.

My wife reminded today that Virginia has a specialty license plate called “Trust Women, Respect Choice.” Here in northern Virginia, I often see a car with that plate with a vanity registration: “I HAD 1.” This license plate tells us the truth. I doubt if this person would say “I HAD 1” if she were talking about mammograms at Planned Parenthood (which they don’t do), or free ultrasounds at Planned Parenthood (which they won’t show the results of to the woman considering abortion), or free birth control pills, or free condoms.

So what do they mean when they say choice? The answer is clear: the ending of innocent human life in a barbaric fashion. On this 40th anniversary of two legal decisions which made every American citizen complicit in the sin of murder, I ask that you find the truth behind the rhetoric and then make an informed decision. You can start where I started 16 years ago: by looking at the results of abortions. Be forewarned that the images are graphic and disturbing, but they are real and it happens 3,300 times every day in the US…1.2 million times every year.

If you have been involved in an abortion decision in your past, please know that the purpose of the video is not to condemn you or shame you. The purpose of the video is to help you understand that no matter what the sin, God loves you and has forgiven you through Jesus Christ’s sacrifice on the cross. Here are three resources for help if you have had an abortion in the past: Word of Hope, Rachel’s Vineyard, and Abortion Recovery International.

Watch the video of aborted babies and strengthen your resolve to end this 40 year atrocity we call “choice.” Click here to see the video.