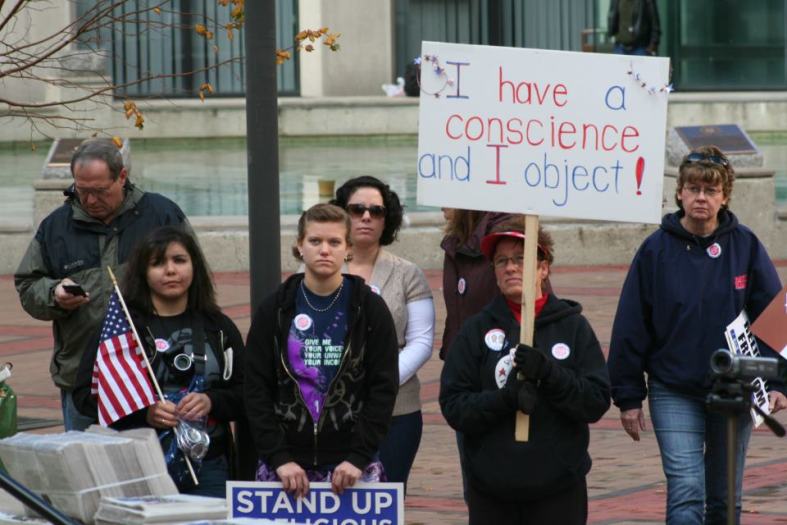 The assault on human life continues when we justify the purposeful killing of a person in the name of science. That’s exactly what the Nazis doctors said to justify the killing and mutilation of Jews (e.g. exposing genitals to radiation to see how that would affect them). Don’t try to use the excuse that embryos don’t look like a human being or they’re just at the early stages, either ALL human life has inherent dignity no matter what stage of development or NO human life has inherent dignity. Make up your mind on which side of the line you stand.

I’m certainly not a doctor, but I’m finding it awfully hard to digest this propaganda PUKE. How can any mother sacrifice her own children to further own agenda…let me ask you this: Would you hand over your born children to be dissected to further science? I mean, are they your children even as embryos or just disposable imperfect trash?

“It was just the responsible, right thing to do,” she said of the donation she and husband, Stephen, made to the University of Michigan. “The idea of being able to help (researchers) get just a little bit closer to a cure is a good feeling.” Read the rest here.

At one time, I bled MICHIGAN MAIZE & BLUE until I found out the truth of the University of Michigan and their hand in furthering the abortion agenda and culture of death.

In a previous post, it is clear that the…

I had the pleasure of meeting Jody Token, National Public Relations Director of American Heritage Girls (AHG), at the 2015 LCMS Life Conference that was just held last week after the March for Life. We had a great time discussing how we (the Lutheran Church–Missouri Synod and AHG) could work together in the future. This possibility came about due to a memorandum of understanding between the LCMS with AHG (see the press release from the LCMS); and I was pleased to find out that the AHG has had, for nearly a year now, a “Respect Life” patch for its members.

Since I found out about this organization several years ago, I have liked it and encouraged friends and family with daughters in the Girl Scouts to consider being part of AHG. But now I have even more reason to support them as AHG encourage its members to “[participate] in an event that brings attention to respecting life or [provide] a service project for an organization whose mission/purpose demonstrates a desire to respect life, such as pregnancy resource centers, pro-life groups and hospices” (read entire press release).

Maybe it’s just me, but…shouldn’t we teach our children to live their faith by, whenever possible, being part of organizations that have the same core values as we do? In this manner, we can show them that our faith isn’t relegated to just one hour on Sunday mornings but, rather, it is central to who we are and what we do.

The MOU states, in part:

The LCMS recommends AHG because it is faith-based. The MOU states, “WHEREAS: The American Heritage Girls program is centered on the same principles, and partners with the local LCMS church to assist and support girls through spiritual development, life skill enhancement, development of teamwork, social skills, citizenship, girl leadership skills while building confidence and discovering their identity in Christ.”

“Therefore be it RESOLVED, The Lutheran Church—Missouri Synod and American Heritage Girls will work together, within the guidelines of the policies and regulations of each organization to establish and nurture American Heritage Girls Troops within The Lutheran Church—Missouri Synod so that girls may be provided with life skills, leadership development opportunities, service programs, and character building opportunities.”

Maybe it’s just me, but…if you’re a Christian you really need to stop supporting the Girl Scouts (and Planned Parenthood, sexual promiscuity, and abortion) and start supporting a faith-based organization that has the same foundation and principles that you do.

Read the press release from the LCMS about the agreement.

Read the MOU in its entirety.

Find out more about the American Heritage Girls.

My good friend, Linda Bartlett, has written a must-read book for all parents, educators, and anyone who is concerned about abortion. She tackles the foundation of how our society has gotten to where it is regarding attitudes towards sex, marriage, and, ultimately, the value (or lack thereof) of human life.

Without fanfare or ceremony, the deed is done!  I have just completed nearly two years of writing a book.

On May 2, 2014, it was officially published and made available on Amazon.  There is enough left in my well of words to say “thank you” to an extraordinarily patient and helpful support team.  You know who you are.

The title of the book is The Failure of Sex Education in the Church: Mistaken Identity, Compromised Purity.  It is not the book I dreamed of writing.  It is the book I was compelled to write after thirty years of working with and listening to parents and the children they care about.

The book is 250 pages with over 230 footnotes.  No, I’m not in graduate school, but yes, this is my thesis. It is a dissertation that covers more than the controversial subject of sex education.  It explains how humanists…

Well said thoughts on using artificial reproductive technologies, which include artificial insemination and in vitro fertilization.

I read books by Evangelical Pastors intermittently throughout my regular Bible reading and keeping up with current events. I don’t always agree with their ‘personal’ theology but when it steps on the toes of God and unborn children, I put on the brakes.

I purchased a book called the Audacity of Prayer. It’s filled with real testimonies of Christians with real medical issues and emergencies and how prayer brought them the miracle they needed. I love the encouragement that testimonies give us. However, there are Christians who truly believe that what happened to them was from God….but that’s not always so.

I was about two thirds through the book when a Chapter dedicated to a childless couple seeking to have children said they received their miracle children…through artificial means. In this particular instance, it was artificial insemination. Considering these people are dedicated Evangelical Christians and believed this to be…