I’m not quite sure how to interpret this political cartoon which appeared over the weekend in the Chicago Tribune by Scott Santis. 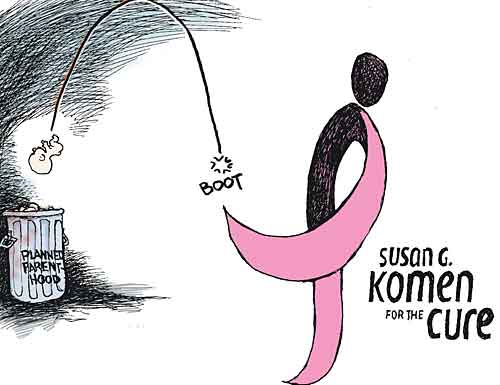 Is he acknowledging that Susan G. Komen for the Cure gave Planned Parenthood the boot because Komen acknowledged that PP does abortions (baby into the garbage can)? If that’s so, then I think it’s great.

Ultimately, Komen made a choice not to support an organization that killed nearly 330,000 babies last year. BTW, that’s only the surgical abortion procedures and doesn’t include the RU-486 abortions; and who knows how many may have been caused by emergency contraception (1.46 million distributed).

But the bottom line is that Komen chose not to support Planned Parenthood for whatever reason it chose and the so-called pro-choice folks didn’t like it. That’s great, but that’s now their choice not to support Komen and  just move on instead of continuing to vilify Komen and its directors and employees for their choice.

Maybe it’s just me, but it seems the only time a choice is not a choice is when it’s not for the pro-choice agenda.

Update: Shortly after, Komen decided to continue supporting Planned Parenthood due to the media blitz PP did on Komen.