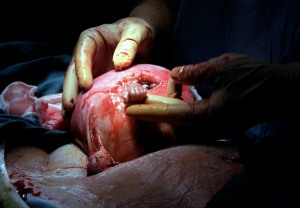 I recently met Michael Clancy at the National Right to Life Convention in Charlotte, North Carolina.  I could not believe that it’s been 10 years since the famous photo (at right) taken by Michael was first published.

Michael was a freelance photojournalist who was documenting an in utero operation on a baby with spina bifida.  Suddenly, the baby (later named Samuel) reached out of the womb to grab the surgeon’s finger.  Samuel was only 21 weeks old at that time.

Fox News recently published an article about Samuel and what he’s doing now, including winning first place in swimming competitions.

In the article, Michael says that he was pro-choice before the assignment that led to the photograph.  But because of what he witnessed during this surgery, he became pro-life.  Now he is a full-time motivational speaker for pro-life groups.  Click here to go to his website to read the story and see his speaking schedule.

Maybe it’s just me, but…I think we should never forget that the baby in the womb is exactly that–a baby!  Regardless of how the pro-choice folks try to denigrate the life in the womb by calling him a “glob of cells,” “mass of tissue,” or the “product of conception,” we must always return to the one undeniable fact that the life in the womb is a human life that is worthy of our love and protection. With compassion and hope, let’s show mothers (and fathers) struggling with life and death choices understand that there are alternatives to abortion when told that the baby they are carrying is “less than perfect.”

3 thoughts on “The Hand of Hope — Ten Years Later”